The term “expect the unexpected” may have become somewhat trite from overuse, but in the case of any new music from Yelena Eckemoff it certainly is true. Moreover, her work is always deep and extremely well-crafted artistically and technically. Lots of artists strive for this and many succeed, but somehow none seem to do so in the manner that the pianist does. 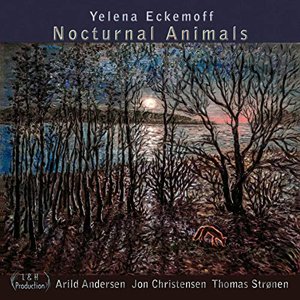 On her 2020 double-CD Nocturnal Animals though, Miss Eckemoff attempts something rather extraordinary – and succeeds beautifully. On these fourteen songs Miss Eckemoff delves into the world of therianthrophy – or put in a more appropriate manner, she becomes a nagual spirit. What this means that she is shapeshifting – her human form is metamorphosing into animal forms; nocturnal animals, to be precise. This is much more than merely a fabulous idea; it’s a belief. But to make it work she rightly assumes the form and character of individual animals and “sings” to us in their voices. The notes of those songs collide with her human form and from here they are given voice.

The French composer Camille Saint-Saëns, an extraordinary figure in 19th century music and further inspiration for the French Impressionist School and whose students included Gabriel Fauré, wrote the iconic, humourous suite Le carnaval des animaux (1886) co-incidentally also in fourteen movements. T.S Eliot wrote whimsical “light” poems and these became Old Possum’s Book of Practical Cats. But Miss Eckemoff’s work is altogether different even if it shares some characteristics of both M Saint-Saëns’ and Mr Eliot’s works. Moreover, Miss Eckemoff seems to write with the nerve endings on her fingers rather than a pencil and thus her work is much more visceral. Her poems – printed in the booklet – may be made up of words and metaphors that communicate to human beings, but the emotions and feelings – especially when imparted to the music are pure and seem to come from a preternatural place.

Shapeshifting is powerfully and constantly evoked and Miss Eckemoff assumes many different forms. The music changes accordingly. It is affecting in the crafty vibrations on songs such as “Fox” and “Wolf”, for instance. It has a certain roar on “Grizzly Bear” and is full of menace on “Rattlesnake” and also weaves in and out of harmonic and disharmonic structures on the latter just as a snake would when it wends its (seemingly) aimless way – until it spies a likely victim, that is. Like those pieces – cited at random – on Disc Two, the music has an extraordinarily sharp bite on “Scorpion” and is majestically languorous on “Sea Turtle”. Best of all, this is not something that the composer implies or scripts into her music, but using every available technique – from touch, dynamics, pedaling and other expressive gestures (from pianissimo to fortissimo and beyond) Miss Eckemoff turns the music into an elegantly primeval experience.

Miraculously, Miss Eckemoff has drawn the bassist Arild Andersen, drummer Jon Christensen and drummer Thomas Strønen into her musical wake. So compelling is her creative spirit that these musicians also perform as if they were shapeshifting themselves. It’s hard not to feel as if they too inhabit the music not simply idiomatically but as each of the beings they are drawn to portray as if they were those very natural beings too. There is a bittersweet aspect to this recording. It was the last one ever made by the great Jon Christensen. Moreover the legendary engineer, Jan Erik Kongshaug – another musical associate of Miss Eckemoff’s – also passed away after this recording was made. What a fine way to sign off on their individual legacies. Miss Eckemoff has also much to thank Rich Breen who mixed and mastered the music. The genius of this technical team shines throughout the warm and vivid sound of this ever-so-memorable recording.

view on web
John Ferngrove for Amazon.co.uk Rainer Guerich for inMusic
Collapse player
Back to top