A note from Yelena Eckemoff

I would like to explain why I decided to provide my own artwork and liner notes writing for all my records, starting in 2013.

I began playing the piano by ear and composed my first pieces at age four. At the same time, I loved drawing, which occupied me for hours. When I was six, I overheard a conversation between my parents, discussing what I should study professionally: music or art. As I recall, they agreed that it would take many years for me to obtain proper musical training, while good drawing and painting skills could be developed without too many years of academic study. I am not sure if they were right or wrong about art education, but it didn’t matter; that very day they decided I should pursue a professional music career.

Nonetheless, over the years, I continued to spend a lot of time with my drawing pad – working with pencils, watercolors, and pastels. Then, in my early twenties, I tried painting in oils. I had a sudden strong feeling that I had always been destined to create oil paintings. My great-grandfather, Pyotr D. Myagkov, was a renowned impressionist artist. People who knew his work compared my painting style with his, saying that I must have inherited his genes.

Unfortunately, my musical training required an increasingly larger portion of my time, until there was little time left for art. So, painting became simply a hobby.

Years later, when I was seeking cover art for my Lions album (2014), I went to the North Carolina Zoo in Asheboro and photographed the lions. Although I took many shots, none of them portrayed exactly what I had in mind. I finally realized that the only way to get the image I wanted was to paint it myself. So, I painted my own lions. And then I adopted the practice of using my own paintings for album cover art.

I always liked to give descriptive titles to my compositions. I remember when, after one of my concerts in Russia, an older gentleman came to me and said, “You play wonderfully, but what I appreciate most is how you name your compositions; your titles are so descriptive and imaginative.”

When I compose my music, I have a concept in mind – drawn from feelings, or events, or even fantasy. I often described the concepts behind my musical pieces to family members and to the musicians who played my music. Their positive responses convinced me that these descriptions help people relate to the music.

When jazz writer Shaun Brady was preparing the Press Release for my Glass Song album (2013), he asked me to write a short paragraph about each track. These notes, written only to help Shaun with his article, impressed him as being quite poetic. He suggested that I consider publishing them as liner notes in the CD booklet. I decided to try it, and have been doing this ever since.

I’m not sure how much my writings add to a listener’s experience of the music, but it means a great deal to me to be able to share, in this way, the images, feelings, and stories that inspire my musical compositions. In certain albums, such as Lions, Everblue, Blooming Tall Phlox, and In the Shadow of a Cloud, in which the various pieces and poems conceptualize interrelated episodes within the story, it seems as if I am writing both the music and the script for a movie. Well, this is the way I have always felt about music, and not only my own.

Here are some of my paintings used in my CD booklets. Click to see bigger image. 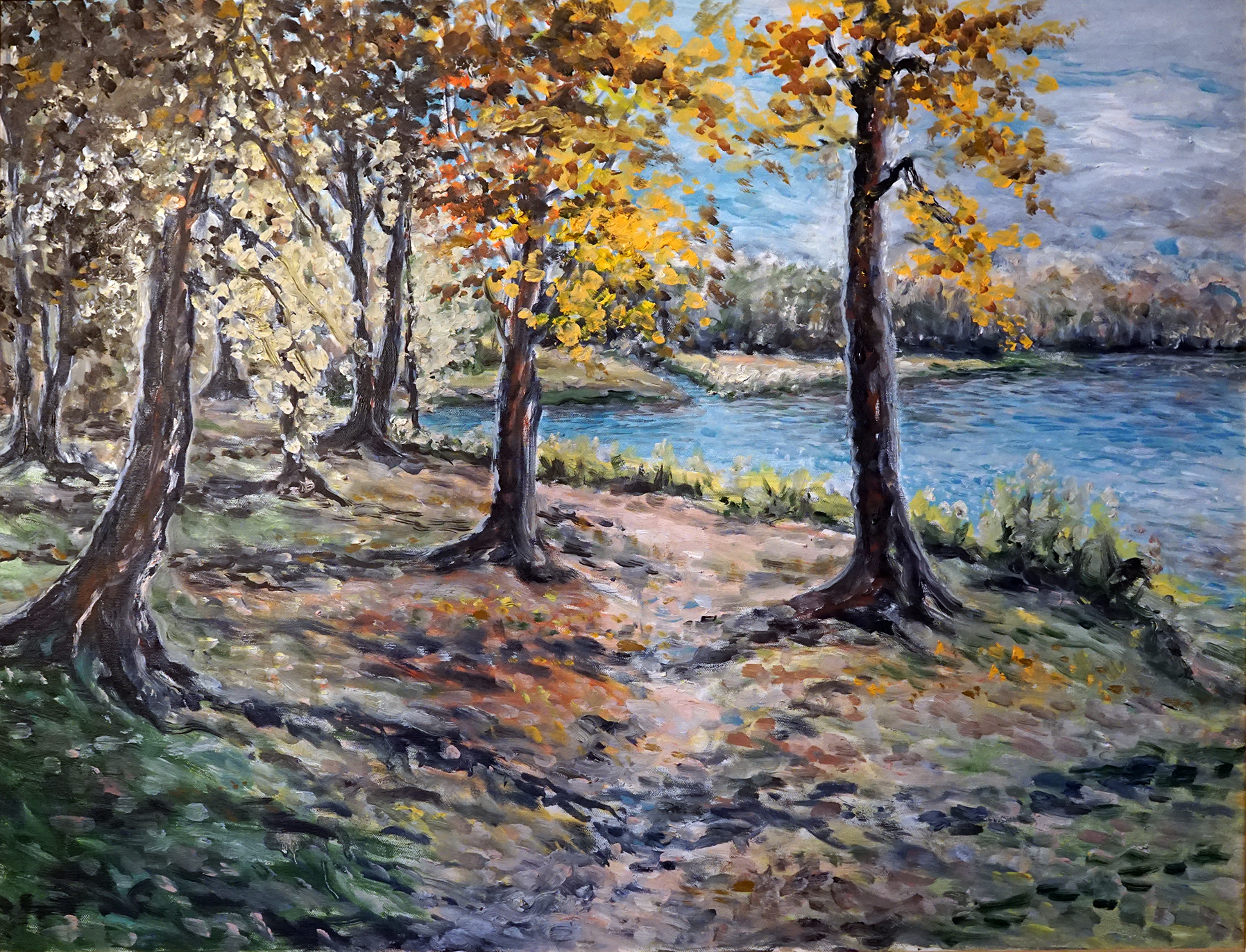 Fall in The Oaks 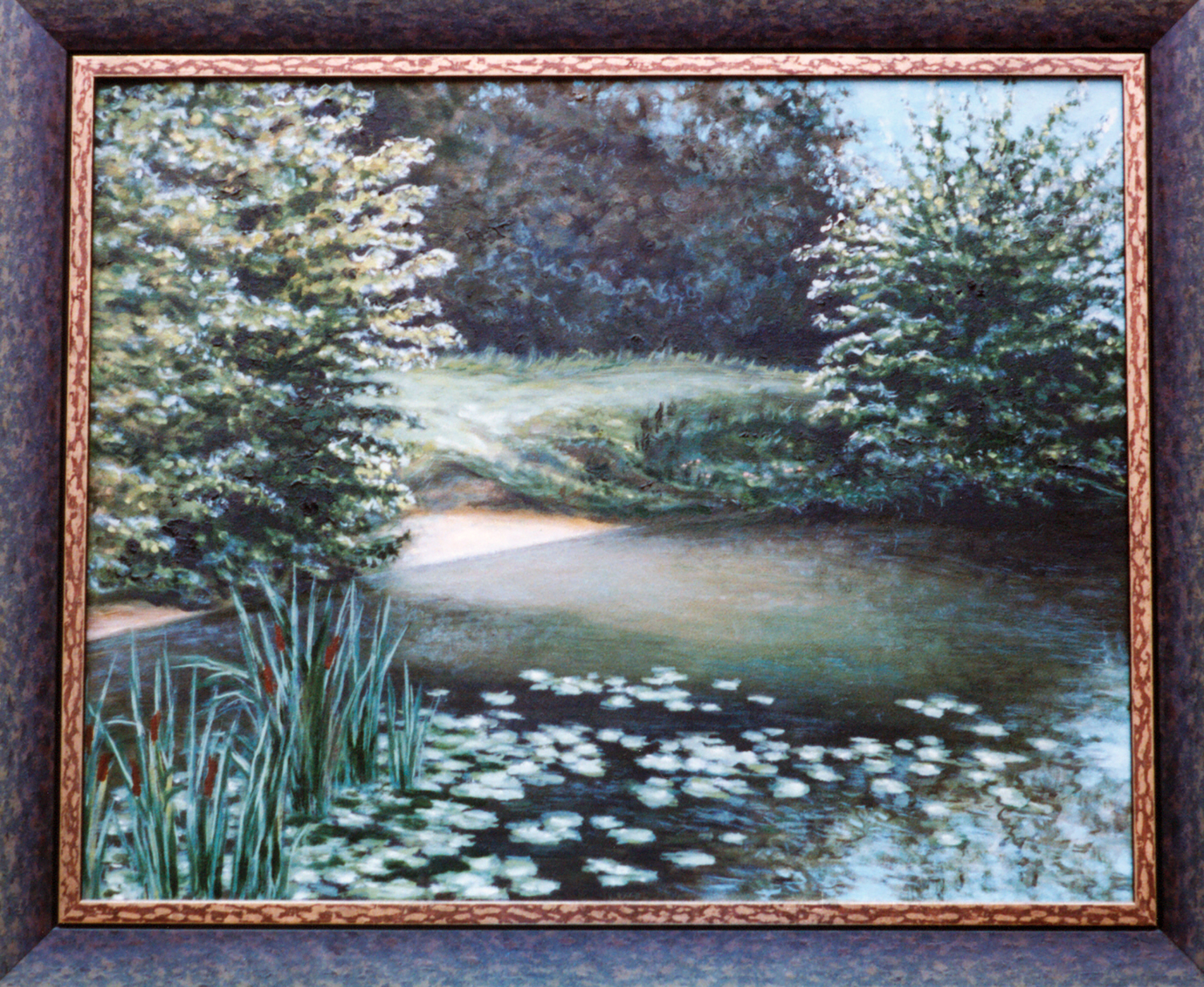 Grandpa in the boat